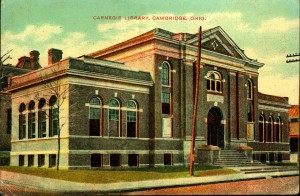 What is now the Guernsey County District Public Library had its start in 1898 when Mrs. J.D. Taylor collected $1800.00 in $25.00 life memberships to buy books and furnish a room on Wheeling Ave. donated by the Honorable J.D. Taylor for a period of five years. In 1901 the 2 cents per day charge for non-members was dropped so that all residents of Cambridge could borrow materials.

The present Main building opened in November 1904. Andrew Carnegie provided funds for construction; the City of Cambridge had to provide land, books and promise to set aside funds for operating expenses.

In 1923 the library became a school district library and granted service to all residents of Guernsey County “by mail and branch distributing stations”.

In 1958 Guernsey County received the first bookmobile in Ohio purchased with federal funds. (For ten years prior to that the library used a second-hand station wagon for county service.) The bookmobile visits communities and senior residences.

In 1948 the library was re-organized as a county district library under new state statutes to become the Guernsey County District Public Library.

Since 1948 the Board of Trustees has been made up of seven members, each serving a seven year term. The County Commissioners appoint four members and the Judge of the Common Pleas Court appoints three members. One term expires each year.

The main source of funding for public libraries in Ohio is the Public Library Fund. By statute libraries in 88 counties share 1.97% of the state’s general revenue tax collection. In recent years the state has put restrictions on the amount libraries may receive to make up for budget shortfalls.

Are you or is someone you know unable to visit due to age or disability? Call 740-432-7536 to see if you qualify for monthly delivery!